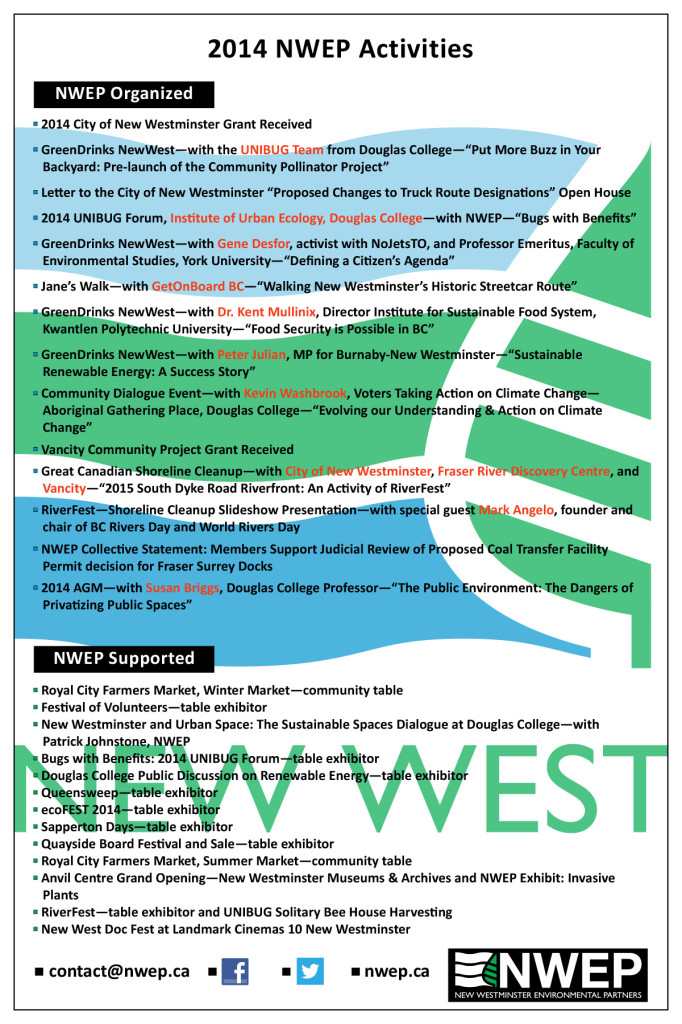 Please Join Us for at the NWEP Annual General Meeting: Thursday, Dec 4, 2014

stock trading platform in Nigeria The New Westminster Environmental Partners invite all members, present, past and future, to our Annual General Meeting, on Thursday, Dec 4, 2014, in the Spruce Room at Century House in Moody Park. The meeting starts at 7:00pm with sign in and meet-and-greet from 6:30pm.

This year’s theme is “Building Meaningful Action” springing from the fact that we have had many meaningful discussions this year, but how can those discussions become realities? How can the success of those actions be measured? And how can an organization like NWEP offer support to its members wanting to build their own initiatives? We want to move these great ideas from discussion to action and invite everyone to be part of that conversation on how to accomplish this.
best stock trading platform in Nigeria 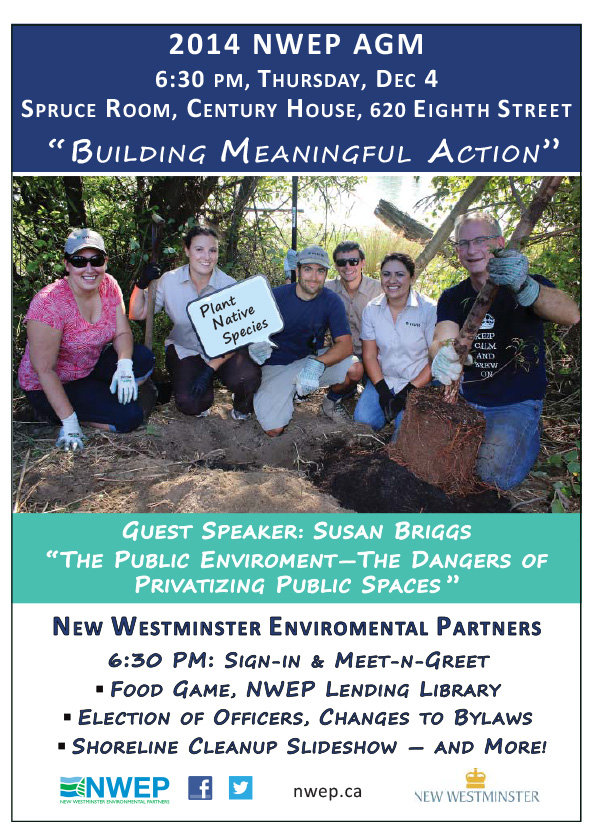 We will also do the normal AGM stuff:  financial disclosure, election of a new Board, and a fun review of the (many) successes of the previous year.

→ We will be discussing our constitution with the intent to change some bylaws — So it is extra important to attend if you would like to have a voice on topics such as directors and officers and the voting process.

→ Nominations will be taken from the floor during the AGM—Please consider joining the board if you want to collaborate and donate your skills to help support the expansion of NWEP activities and influence within our community and beyond with other enthusiastic team members. best stock trading platform

→ Membership Fee — $5 a year, cash or cheque please.If you need us to waive the fee because it is prohibitive for you, we will gladly do so as your participation is what’s truly valued. And if you are able to make a donation to help support our work and other memberships, that’s also appreciated.

→ If you are unable to attend the AGM, you can pay your membership by sending an email to contact @ nwep.ca for details.

Come out, take part in the NWEP, and help build a more sustainable and collaborative community in New Westminster!

Editors Note: All mayoral and council candidates were sent an email asking if they have shared their position on the Direct Coal Transfer Project at Fraser Surrey Docks publicly. If so, they were invited to send ONE online link, such as a letter to the editor they wrote, a media article, a blog post, or a webpage where they have shared their opinion on this issue. Many of the candidates responded without a link, some indicating they didn’t have one, so the decision was made to include some text to allow this important issue to be discussed.

JONATHAN COTE: I am proud to have worked with a council that has opposed the coal project at Fraser Surrey Docks. I do not feel that proper community consultation has occurred, nor has the proper environmental and health studies been completed to properly evaluate this proposal. I am deeply concerned that Port Metro Vancouver is moving ahead with this proposal and I believe all municipalities must continue to fight this proposal. I have opposed the coal proposal every time it has come forward to New Westminster City Council. www.royalcityrecord.com/news/coal-opposition-is-heating-up-1.556885

JAMES CROSTY: My opposition to the Surrey Fraser Dock coal export expansion is well documented. From the very beginning to organizing the first opposition rally complete with the Raging Grannies in New Westminster to starting a petition that garnered over 2,000 signatures presented to Port Metro Vancouver, Surrey Fraser Dock and City of New Westminster. Further I was the only person who arranged a meeting with USA Governor Mead of Wyoming to express New Westminster’s and for that matter the province of BC’s concern about the environmental and health impacts with his state’s export of coal by train thru Burns Bog via SFD and our waterways to Texada Island. I continue to oppose the terminal and currently this expansion is in the hands of the court. http://quaysideboard.com/htm/QCB%20Archives/2013/QCB%20archive%20APRIL%2013.htm

VLADIMIR KRASNOGOR: My position if elected will be same as now. We may not be able to prevent coal transfer completely, but we can ensure it will be done in minimal quantity, and with all reasonable environmental protection measures taken. You can count on me as Mayor that any impact on New Westminster will be carefully monitored and any deficiency will be promptly reported to responsible federal and provincial agencies.

WAYNE WRIGHT: I have been fully involved in opposition for this terminal. I have made it known to other neighbouring Mayors, spoken at events and always simply against the project. I was seated in an event in Toronto with mayors from coal producing areas in BC and explained to them I was not against their mines and anthracite coal. But I thought they should join with us to stop dirty US coal, that no other port in the US will take. Our port facilities should be used for a much higher job creating use for Gateway shipping which is to triple and more in the future. I have no media items but I am sure you are aware of my and city position.”

JOHN ASHDOWN: I have not publicly stated my position as is not a civic issue, with the exception of the dust contamination. With modern day technology I am sure that can be remedied. My objection to BC (surrey) handling USA low grade coal when US ports won’t, is an issue. I have not looked at the facility at Texada  Isl. But would be concerned about environment issues regarding dust and contamination of waters.  Do have some experience with home in Beach Grove having to wash railings due to Roberts Bank coal.

CATHERINE CARTWRIGHT: I do not agree with the shipping of U.S. thermal coal from Fraser Surrey Docks.  The limited number (25) of jobs generated from this facility/shipment in no way compensates for the potential health and environmental damage that will stem from it. However that being said, given that it has been approved by Port Metro Vancouver, and the chances (unfortunately) of reversing this decision are slim;  it is  important that air quality and the environment be continuously monitored to ensure the mitigation steps planned are enforced and effective.

BILL HARPER: As you are aware I am a city councillor in New Westminster.  It was my motion that first challenged Metro Vancouver on the coal port by requesting any environmental assessment they had done regarding the proposal.  We invited Port Metro to council and challenged them on the potential risks on the environment and potential risks to people’s health.  The council then held a public forum on the subject at Douglas College.  We have passed motions opposing the Ports project, and are one challenging there decision in court. I have been opposed to the development of this coal port every step of the way.

PATRICK JOHNSTONE: Here is a recent piece I wrote: http://nwimby.blogspot.ca/2014/08/disappointing-not-surprising.html

JAIMIE McEVOY: I am proud to have worked with a council that has opposed the coal project at Fraser Surrey Docks. I do not feel that proper community consultation has occurred, nor has the proper environmental and health studies been completed to properly evaluate this proposal. I am deeply concerned that Port Metro Vancouver is moving ahead with this proposal and I believe all municipalities must continue to fight this proposal. I have opposed the coal proposal every time it has come forward to New Westminster City Council. https://www.youtube.com/watch?v=e9-YYBAwCjo

HARM WOLDRING: While I am not in support of the coal terminal facility I also don’t believe we are operating from a higher moral ground until we do more to improve our own record. If elected I will move that New Westminster create an incentive program, using part of our annual $8M a year in profits from the electrical utility, for homeowners to install solar panels on their homes. The long term objective is to make New Westminster the first Canadian city to become electrical energy independent! If we achieve this goal I then believe we have the moral right to demand equal levels from other countries and governments.

On Aug 21, 2014, members of the New Westminster Environmental Partners were disappointed to hear that the permit to convert Fraser Surrey Docks into a terminal for the export of U.S. thermal coal was approved, signed by CEO and PMV President Robin Silvester. We see this decision as lacking accountability to the communities Port Metro Vancouver is purported to serve, and we believe it exposes an inherent flaw in a review process that was so narrow in focus and so bereft of transparency that this decision became a foregone conclusion.

It is our opinion that in making their decision Port Metro Vancouver (PMV) dismissed the legitimate concerns of the surrounding municipal governments and their residents, First Nations, health officials, and engaged citizens who almost unanimously oppose this project. From our perspective, their decision disregards the standards and bylaws established in the communities that host their operations. It also ignores the body of science regarding the impact of coal dust on human health and the environment, and the global impact of burning thermal coal. Furthermore, the Port failed to address the neighbourhood impacts of more than 2500 additional diesel locomotives passing though residential neighbourhoods every year, a critical omission, in our view.

Members see this decision coming at a time when the world community is coming to terms with the devastating evidence of the current impacts of climate change related to the burning of fossil fuels. The global response against anthropogenic climate change has already begun, and our regional neighbours are already taking action. From drought-ravaged California to Puget Sound, local legislators are saying “no” to terminal proposals like this one. We believe the move to make BC the “port of last refuge”, as a means to benefit the province’s economy, is a move backwards that threatens our international reputation and our global responsibility.

In response to PMV’s decision to support the expansion of coal exports, our members’ commitment to protect our communities and to respond to the needs of our environment strengthens. Community groups, municipalities, health and environmental professionals, First Nations, and concerned citizens from all walks of life are now united by a common cause. We will continue to work together to call for accountability from members of our Port Authority, our Government, and from corporations who hope to gain the social license to operate in our communities and to add citizens’ voices to the decision-making process for the benefit of our broader community.

NWEP Collective Statement: All members who responded, through email, agreed with this statement. (Oct 3, 2014)